Quadrant is the region enclosed by the intersection of the X-axis and the Y-axis. On the cartesian plane when the two axes, X-axis and Y-axis, intersect with each other at 90º there are four regions formed around it, and those regions are called quadrants. So, every plane has four quadrants each bounded by half of the axes. Each quadrant is denoted by Roman numerals and named as Quadrant I, Quadrant II, Quadrant III, and Quadrant IV based on their position with respect to the axes.

What is a Quadrant?

In the cartesian system, a plane is divided into four regions by a horizontal line called X-axis and a vertical line called Y-axis.

Quadrant Definition: A quadrant can be defined as a region/part of a cartesian plane which is obtained when the two axes intersect each other. It is used to determine the position of a point in a plane.

What are the 4 Quadrants?

The X and the Y axes divide the plane into four graph quadrants:

It should be noted that the quadrants are numbered in an anti-clockwise direction.

The point where the X-axis and the Y-axis meet is called the origin. The values of x and y at the origin are (0,0).

If we observe the horizontal axis ‘x’, as we move from left to right, we see that the value of the coordinates increases. Similarly, on the vertical axis ‘y’, as we go in the upward direction, the value goes on increasing. So, the sign convention of the four quadrants will be as shown below:

How to Plot Points on Quadrants?

The numbers in the quadrant are the ordered pair (a, b) where ‘a’ is the x- coordinate and ‘b’ is the y-coordinate. To understand how to plot a point in the four quadrants, we need to observe the signs of an x-coordinate (also called abscissa) and a y-coordinate (also called ordinate). This gives an idea about the quadrant in which the given point lies. For example, we are given a point P (-4,6). Without even plotting it on a graph, by observing its sign (-ve, +ve) we can make out that it lies in the quadrant II .

Let’s plot the point D (5,-3) on a cartesian plane. First, observe the sign to identify its quadrant. The point is of the type (+ve, -ve) which lies in quadrant IV. Abscissa = 5; So, take a point P at a distance of 5 units from the origin on the right-hand side. Ordinate = -3; So, move the point P vertically down by a distance of 3 units. 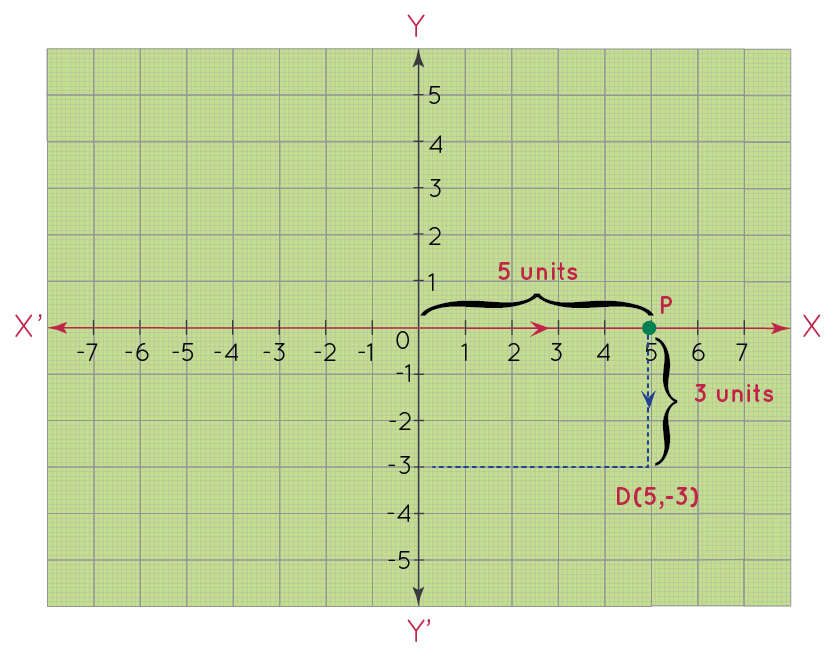 Check out these interesting articles related to the topic quadrant.

Try to solve these challenging questions related to Quadrants:

What are the 4 Quadrants?

The x and the y axes divide the plane into four graph quadrants. These are formed by the intersection of the x and y axes and are named as: Quadrant I, II, III, and IV. In words, we call them first, second, third, and fourth quadrant. All the quadrants are different from each other based on the position and symbol of the x and y-coordinates.

Which Quadrant is Positive?

What is in the Right Upper Quadrant?

The right upper quadrant is the first quadrant containing all the positive values of the x and y axes starting from 0, i.e., the origin.

Is Quadrant 4 Positive or Negative?

Is Quadrant 1 Positive or Negative?

In quadrant 1, both x and y coordinates are positive. Hence, it is positive.