What Is Pythagoras Theorem?

The Pythagoras theorem states that if a triangle is right-angled (90 degrees), then the square of the hypotenuse is equal to the sum of the squares of the other two sides. In the given triangle ABC, we have BC2 = AB2 + AC2​​. Here, ​​​​AB is the base, AC is the altitude or the height, and BC is the hypotenuse.

Although Pythagoras introduced and popularised the theorem, there is sufficient evidence proving its existence in other civilizations, 1000 years before Pythagoras was born. The oldest known evidence dates back to between 20th to 16th Century B.C in the Old Babylonian Period.

The Pythagoras theorem formula states that in a right triangle ABC, the square of the hypotenuse is equal to the sum of the square of the other two legs. If AB, BC, and AC are the sides of the triangle, then: BC2 = AB2 + AC2​. While if a, b, and c are the sides of the triangle, then ​c2 = a2 + b2. In this case, we can say that AB is the base, AC is the altitude or the height, and BC is the hypotenuse.

Pythagoras theorem can be proved in many ways. Some of the most common and most widely used methods are by using the algebraic method proof and using the similar triangles method to solve them. Let us have a look at both of these methods individually in order to understand the proof of this theorem.

Algebraic method proof of Pythagoras theorem will help us in deriving the proof of the Pythagoras Theorem by using the values of a, b, and c (values of the measures of the side lengths corresponding to sides BC, AC, and AB respectively). Consider four right triangles ABC where b is the base, a is the height and c is the hypotenuse. Arrange these four congruent right triangles in the given square, whose side is a + b. 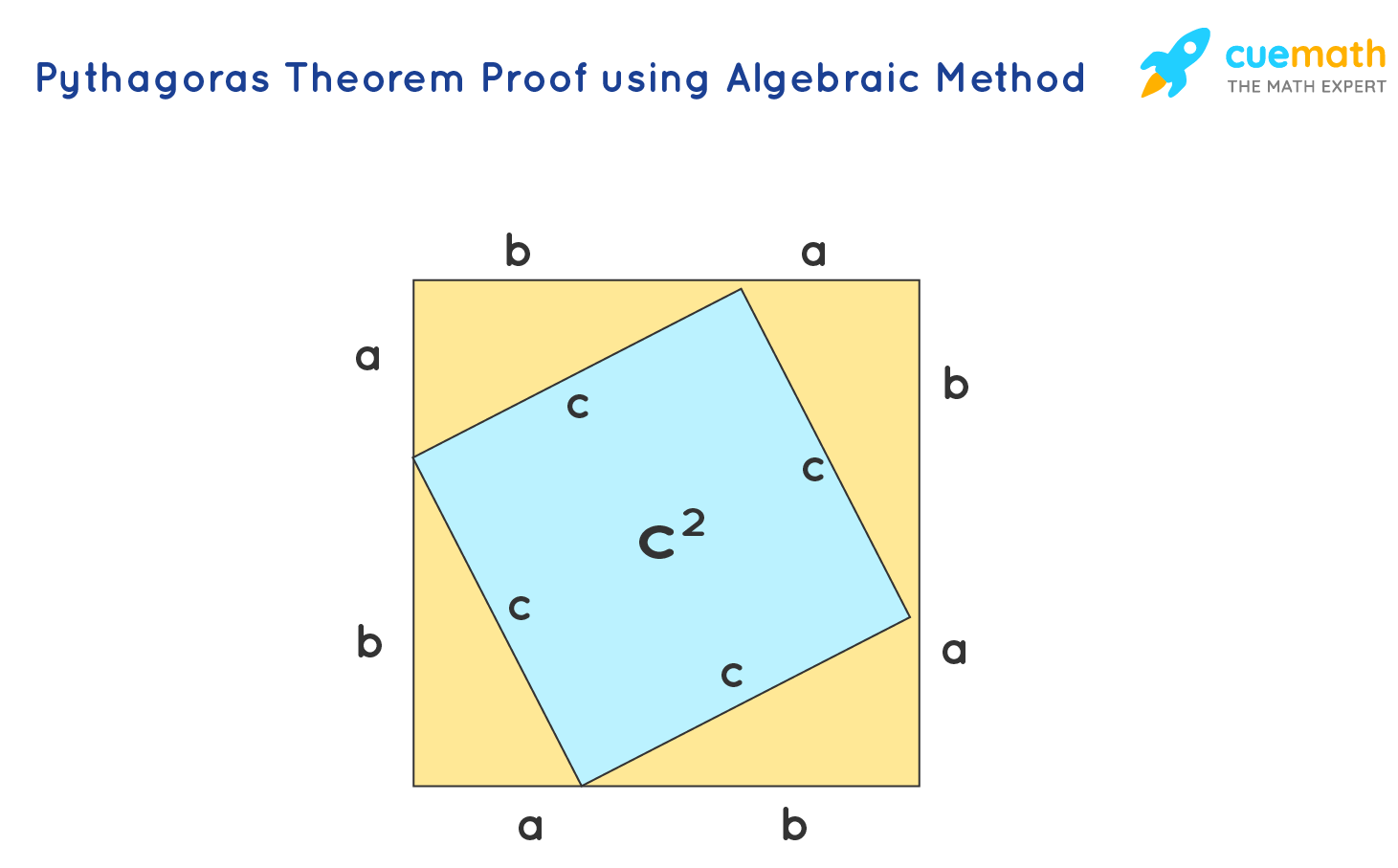 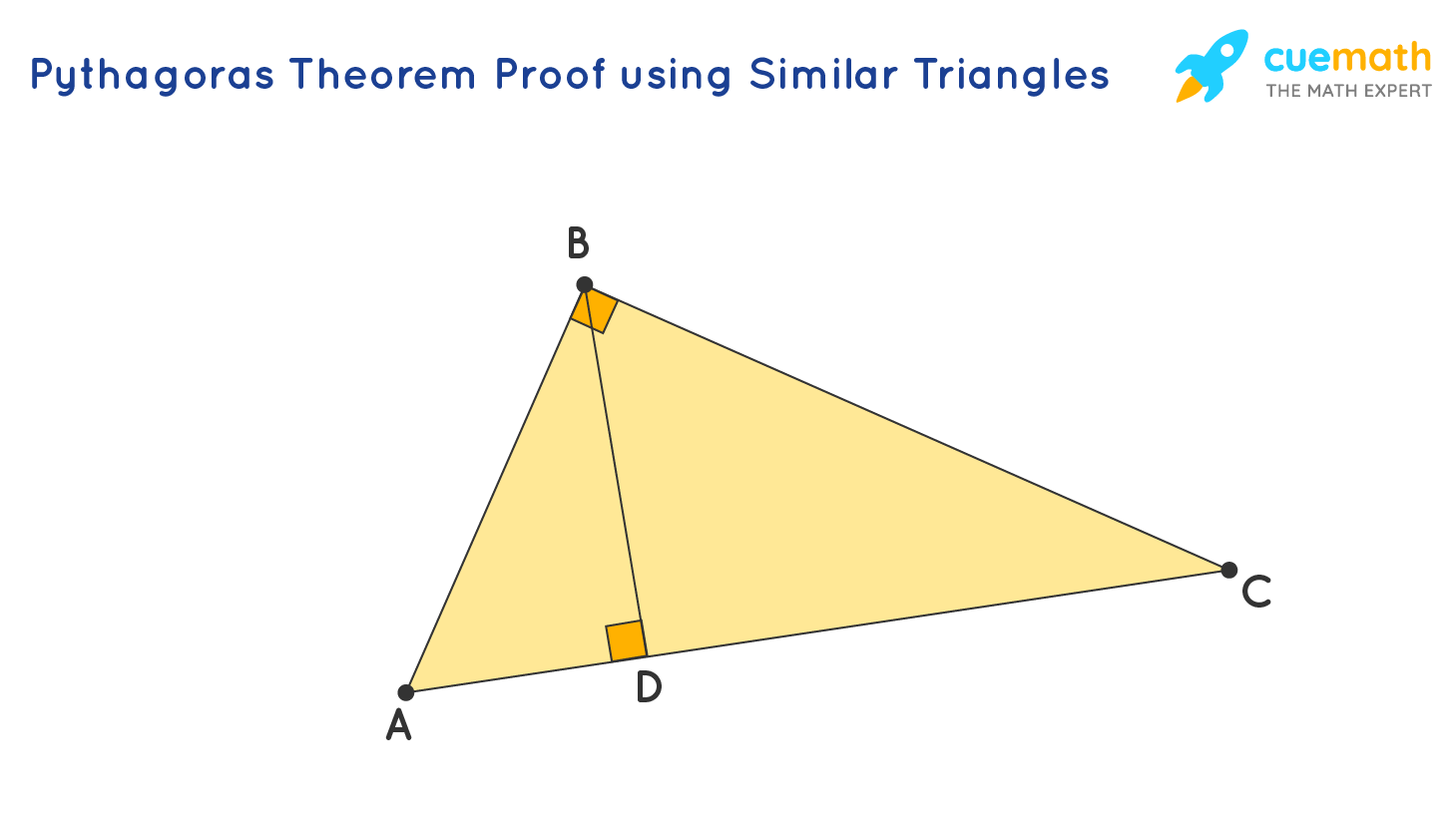 Thus, triangle ABD and triangle ACB are equiangular, which means that they are similar by AA similarity criterion. Similarly, we can prove triangle BCD similar to triangle ACB. Since triangles ABD and ACB are similar, we have AD/AB = AB/AC. Thus we can say that AD × AC = AB2. Similarly, triangles BCD and ACB are similar. That gives us CD/BC = BC/AC. Thus, we can also say that CD × AC = BC2. Now, using both of these similarity equations, we can say that AC2 = AB2 + BC2. Hence Proved.

Though it is necessary to learn the basic concepts such as theorem statements and their mathematical representation, we would be more curious in understanding the applications of the Pythagoras theorem which we face in day-to-day life situations.

Here are some of the applications of the Pythagoras Theorem

Most architects use the technique of the Pythagorean theorem to find the value as well as when length or breadth are known it is very easy to calculate the diameter of a particular sector. It is mainly used in two dimensions in engineering fields.

We aze more familiar with face recognition nowadays it reduces the turmoil in investigating the crimes in the security areas. It undergoes the concept of the Pythagorean theorem that is, the distance between the security camera and the place where the person is noted is well projected through the lens using the concept.

As the main concept indicates if the cardboards being square can be made into a triangle easily by cutting diagonally then very easily the Pythagoras concept can be applied. Most woodworks are made on the strategy which makes it easier for designers to proceed.

It’s a very amazing fact but people traveling in the sea use this technique to find the shortest distance and route to proceed to their concerned places.

Usually, surveyors use this technique to find the steep mountainous region, knowing the horizontal region it would be easier for them to calculate the rest using the Pythagoras concept. The fixed distance and the varying one can be looked through a telescope by the surveyor which makes the path easier.

What Is the Pythagoras Theorem in Math?

What is the Converse of Pythagoras theorem?

The converse of Pythagoras theorem is: If the sum of the squares of any two sides of a triangle is equal to the square to the third (largest) side, then it is said to be a right-angled triangle.

What Is the Use of the Pythagoras Theorem?

How Do You Find the Pythagoras Theorem for a Right Triangle?

What Are the Applications of the Pythagorean Theorem in Real Life?

The Pythagorean theorem helps in

How Do You Solve A Squared Plus B Squared Equals to C Squared Using Pythagorean Theorem?

A squared plus B squared equals to C squared implies c2 = a2 + b2, which is the formula of the Pythagoras theorem, for figuring out the hypotenuse in a right triangle when the other two sides are given.

Can We Apply the Pythagorean Theorem to Any Triangle?

No, you can’t apply the Pythagoras or the Pythagorean theorem to any triangle. It needs to be a right-angled triangle only then one can use the Pythagoras theorem and obtain the relation where the sum of two squared sides is equal to the square of the third side.